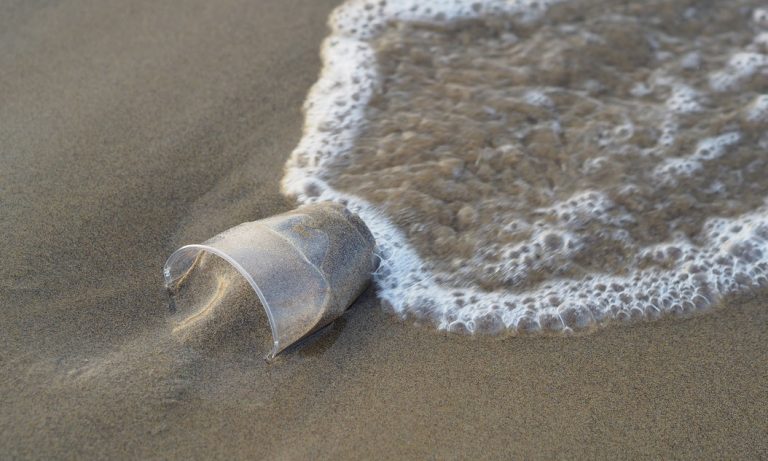 Around three quarters (71%) of the Earth’s surface is water. Even though the ocean does not have borders, it is classified into five different areas: the Pacific, Atlantic, Indian, Southern (Antarctic) and Artic oceans.  Every area of the ocean is polluted, and according to a study made by the Ocean Cleanup Foundation, even though there is also glass and wood in the sea, 99.9% is plastic. Around 10 million tons of plastic and other kind of waste entered the ocean only in 2010.
The most polluted ocean is the Pacific with 2 trillion plastic pieces and one third of the plastic found in this ocean circulates in the North Pacific Gyre. An ocean gyre is a large system of circular ocean currents formed by global wind patterns and forces of the Earth’s rotation. The center of the gyres is stable, so the circular motion draws debris into the center where it gets trapped.
This North Pacific gyre brings the garbage between Japan and the United States and forms the Great Pacific Garbage Patch. Most of the debris (80%) in it come from land-based activities in North America and Asia, while 20% comes from the waste directly thrown to the ocean by boats, ships, etc. Most of this are fishing nets. A garbage patch is not only floating plastic bottles and bags, but millions and millions of micro plastic pieces as well. This is the result of using non-biodegradable plastic, that finds its way to the sea and there with the sun exposure, breaks into tinier pieces, which they usually can’t be seen by the naked eye. Sometimes they look like a white screen on the surface. It is also important to know that according to National Geographic, 70% of the marine debris actually sinks to the bottom of the ocean. Some of the debris have been actually found in the Mariana Trench, the deepest point of the ocean.

The second most polluted ocean is the Indian with 1.3 trillion plastic pieces, mostly found in the Indian Ocean garbage patch. This is due to the river mouths of two of the 10 most polluted rivers in the world going directly to the Indian Ocean, the Indus and Ganges. We have all read about some consequences of the pollution of the ocean, for example the turtles that drown due to plastic bags in their necks, etc. Nonetheless, the damage goes much further and affects us directly. The plastic that fishes eat releases chemicals that are absorbed by their fat and muscles that we later eat in our favorite seafood dish. Scientists have found micro plastics in 114 marine species, and more than half are part of our regular diet.
On the other hand, the shade formed by the micro plastics on the surface, blocks the sunlight from coming to the plankton and algae. The sunlight is necessary for them to produce their own nutrients. Without this, the plankton and algae are threatened, hence the whole food chain changes. As this means the fishes will have less food, there will be less fish, making it more expensive for people. The less polluted oceans are the South Pacific and South Atlantic, because the human activity is more limited. Both are located in the southern hemisphere which are less populated.

This shows that the future of plastic in our ocean will be determined by the way we handle plastic on land. Plastic production and consumption are predicted to double over the next 10 years. That means that if we don’t do something now, we could be facing 250 million metric tons in less than 10 years. The good thing is that, as the plastic pollution is a people problem, people can also solve it. And the best way of fighting this problem is prevention, by limiting or eliminating the use of plastic.

Citarum – The World´s Most Polluted River… Is Being Cleaned