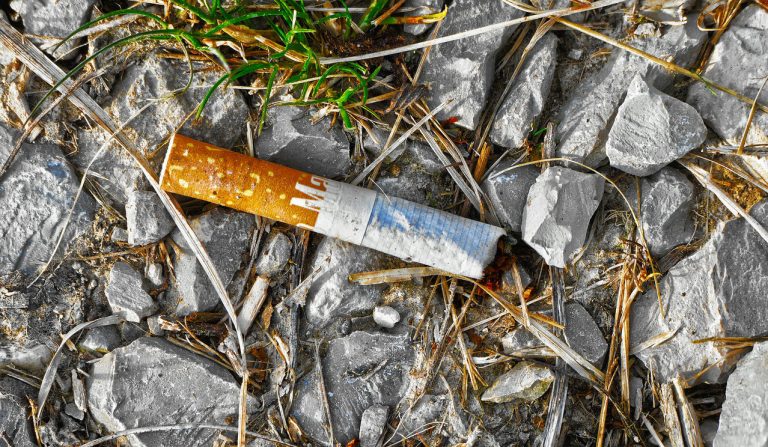 Every year 5,6 trillion cigarettes are smoked, of which 4,5 trillion end up in the environment. A study of the World Health Organization concluded, that Cigarette Filters make up 30-40 percent of the total litter that’s collected in cities and on beaches. With up to 80% of every smoked cigarette thrown onto the ground, between 340 and 680 million kilograms of tobacco litter pollute the world every year. Almost all filters are made out of cellulose acetate – a form of plastic which takes up to twelve years to degrade. Birds mistake these small and light pieces of plastic for food, or the filters end up in rivers and oceans where marine animals digest them.

The Toxins in Cigarette Butts

After reaching the environment, the cigarette filters break into smaller plastic pieces containing and eventually leaching out some of the 7000 chemicals contained in a cigarette. Many of these chemicals are environmentally toxic, of which at least 50 are known to cause cancer. A frequently cited study by the San Diego State University concluded that only one cigarette filter per liter of water is enough to kill half of the fishes in the water. However the researchers had difficulties to evaluate which toxins were responsible for killing the fishes, due to the extremely high number of toxins that were found – including nicotine, tar, arsenic and heavy metals like lead, copper and chrome.

Filters can actually INCREASE the impact of cigarettes on your health

Many might say that filters are needed to mitigate the danger of smoking and to not allow the hazardous particles to reach the lung. However decades of research show that the opposite might be the case: The World Health Organization concludes that “claims that filtered cigarettes were “healthier” were fraudulent. The only thing filters may have done is make smoking easier and less harsh, increasing both the risk of addiction for smokers and the overall burden of the non-biodegradable and toxic cellulose acetate filters in our environment“. In 2010, a team of researchers concluded that “the shift from nonfilter to filter cigarettes appears to have merely altered the most frequent type of lung cancer, from squamous cell carcinoma to adenocarcinoma.” From the 1960s to the 1980s, the American Cancer Society reported an almost two-fold increase in risk for smoking men, and a 10-fold increase in risk for smoking women to suffer from adenocarcinoma.

The fact that cigarette filters could be useless to reduce the harm of smoking was known since the 1960s, however for the last 60 years misleading marketing of filtered cigarettes has persisted. It  was not only proven that filters are useless to protect smokers, but in 2017 a study was published in the Journal of the National Cancer Institute which strongly suggests that filters can actually INCREASE lung cancer risks. The researchers argued that filters allow consumers to inhale more smoke due to the perceived “smoothness” of the smoke and “cause a false perception of lower health risks from “lighter” smoke”. Additionally the filters only allow small toxic particles to pass, which in turn are able to get further into the lung.

What can Women do for the Environment?

The EU Parliament agrees on “victory for our oceans”